Ever since I started racing with the pros I’ve said that I could make the podium if enough fast guys drop out.  I proved that theory at the Taming the Tetons race in Jackson, Wyoming last Saturday.  Chris Fox dropped out, Chris Holley broke his chain, a lot of other guys just didn’t show up.  One of the locals embarrassed us all by dropping us in the first mile on his single speed.  Marc Wimmer raced like I’ve never seen him race before for second place.  I held on for third, and my first cash payoff as a pro.  I took home a check for a whopping 64 bucks.  That brings the total cash earnings for my racing ‘career’ to $79.  Mags says I shouldn’t quit my day job just yet.

After the race we spent three days canoeing in Grand Teton National Park. And saw some wild critters… 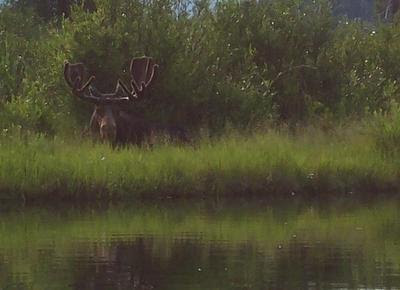 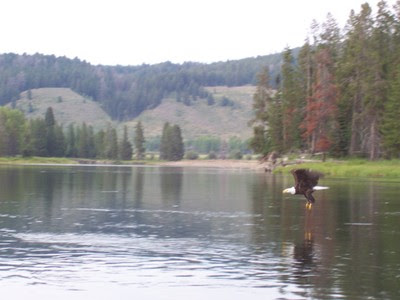 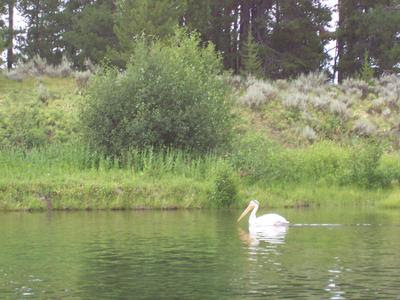 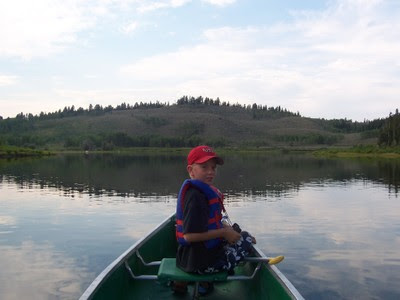 Reasons not to ride?

I decided to boycott the Snowbird Race last weekend because,
well, that course just sucks. It’s a
steep, boring, dusty climb rewarded with a steeper, gravelly fire road
descent. Nobody would actually ride that
course for recreation. I think the only
reason they still hold the race is tradition; they’ve been racing on the same
course for 20 years.

I was lucky I didn’t race. Instead my brother and I decided to ride up the Tibble Fork trail to
some of the best trails found anywhere. Just
30 feet into the ride my rear brake blew up. It was clicking like I had a baseball card in my spokes. I stopped and futzed with it for 25 minutes before
deciding I couldn’t fix it. I took the
pads out and rode with only my front brake. I felt OK going uphill but decided it was unsafe to ride back down.

In the past week I’ve had two other strong signals that it’s
unsafe to ride. First, this article in
the New York Times says that exercising in low levels of pollution causes similar
lung damage to sitting around in high levels of pollution.  Something for me to think about while I ride in Salt Lake's bad air. 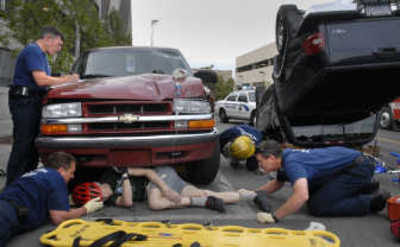 Then Ben, my friend in Spokane,
got hit by a truck while he was waiting at a stop sign on his bicycle. He was just in the wrong place at the wrong
time, but he’s lucky to be alive. It’s
caused a bit of a stir among cyclists in Spokane
since the driver, who had run the stop sign, wasn’t even charged with
negligence or recklessness.

So what do I do? Are these valid reasons to quit
riding?

Ben had this to say
about his incident: 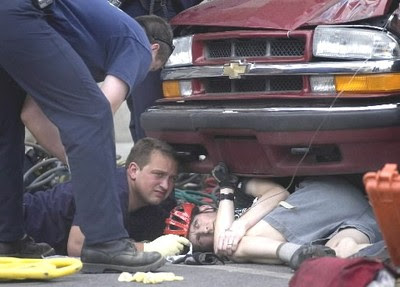 I am reasonably OK with a very sore back and lots of
bruises.  I fractured 3 transverse processes on the vertebrae in my lumbar
spine and chipped my iliac crest.  I haven't been back to work
since.  I will probably ride the bus until my back heals.  And then
figure out which bike to get back on.

My helmet got smashed and my bike is ruined. Ride safely, watch out for mowers, and
wear your helmet.

And Dr. David Newby, as quoted in the New York Times article
above, sums it up nicely with a different perspective:

“I ride my bike back and forth to work every day,” he said.
“If everyone else did that, too, we wouldn’t be having this problem at all,
would we?” 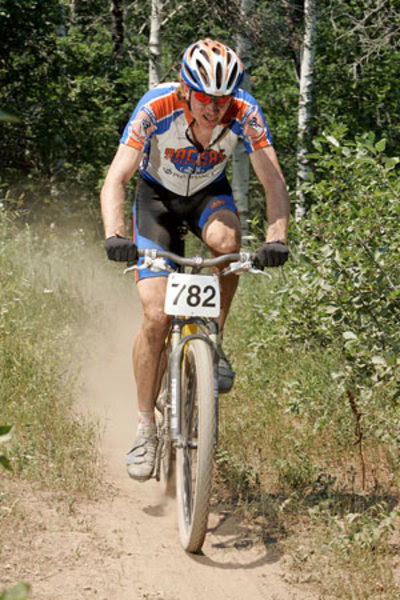 I had a pretty good race on Saturday.  I felt much stronger than last week at Solitude, probably because I had been riding instead of fly fishing all week.  Normally I really like the race course at Sherwood Hills.  It’s got lots of tight, twisty singletrack through dark woods.  The trees are so thick that in many places you can be 20 seconds behind someone and not know it because you can’t see them.  I also like the absence of white-knuckle descents, which are a weakness of mine, but this year the race was one month later in the year so the course was really dusty.  I almost crashed at the start when the dust got so thick that I literally could not see any of the trail.  I could only see the rider in front of me from the waist up.  In other places the trail was so rutted that my back wheel was more useful as a rudder than a wheel for getting me through. 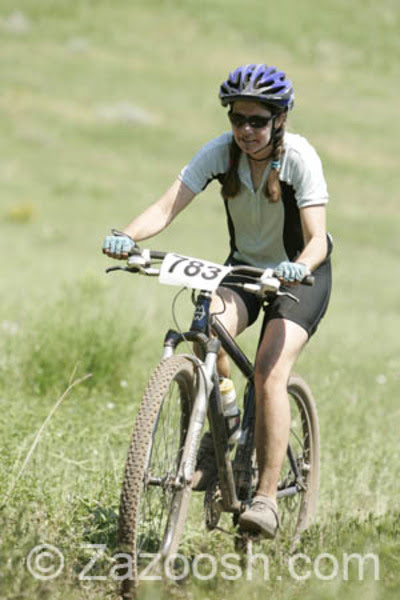 Mags raced in the Sport Women category on Saturday too.  She was worried about coming in last because it was only her second race ever, but she finished third out of five.  She was a few minutes behind Bob’s wife, Lyna.  Could this be the next exciting chapter in the Saffell/Harris rivalry?

At the starting line I chatted with Rich and my teammate Aaron about Bart’s new sponsor, Mona Vie.  It’s another of those special juice blends that’s meant to make you live forever.  This one is made from the acai berry of Brazil, and yes, it’s marketed with a multi-level business plan.  I won’t go on about multi-level marketing today because I’ve done that elsewhere, but I do have a few things to say about fruit.

At the starting line, Rich said that he thinks fruit is good for you, but that he thinks apples and oranges are just as good as acai berries from Brazil.  I would also add that they’re as good as gac from Viet Nam, noni from Tahiti and mangosteen from Asia, which are all key ingredients in locally based multi-level marketing scams to cure everything from gout to cancer. 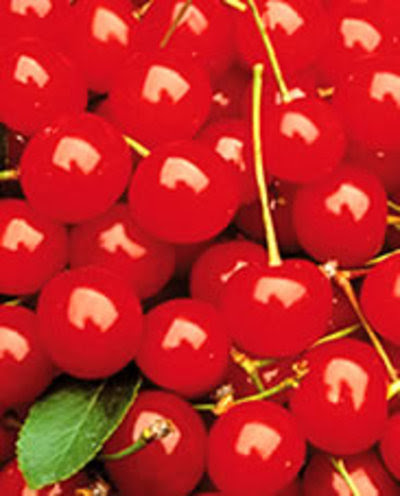 I should add that after the race Mags and I stopped at a U-Pick cherry farm and picked 84 lbs of tart cherries for canning, baking and drying.  The 79 year old cherry farmer told us that he is as healthy as he is (he did look like he was in his early 60s) because he’s been farming and eating cherries for 60 years.  He even had some literature to back him up.  Did you know that cherries are rich in melatonin?  Neither did I, but apparently it’s a powerful antioxidant.

So what’s the difference between local cherries that are 50 cents a pound and superfruits from exotic lands that cost upwards of 30 dollars a liter?  Marketing.  It’s just too hard to make something as common as a cherry look chic.

The point is that all fruit is good, but locally produced fruit is better because it costs less and requires fewer resources to get it to the consumer.  It usually tastes better too.  I’ve read that we should eat fruits and vegetables from the entire range of the color spectrum; from beets and strawberries to spinach and broccoli, to yams, to turnips to beans to blueberries to squash--all things you can buy at your local farmers market.  Throw in some whole grains and you’ve got the basis of a better diet than anything you can buy for 30 dollars a bottle.

See, it can be done


Mags comes from a big family. No, I take that back. It’s huge. She has 60 first cousins, and most of them
have spouses and a lot of them have kids. When they all get together they go through food like a swarm of Mormon
Crickets.

They’ll be at it again this Independence Day. The whole mob is getting together for a big
picnic at Bear Lake and my sweet wife has been assigned
the task of providing enough potato salad to strengthen and nourish them all.

There is only one place to find everything on that list, in
those quantities: 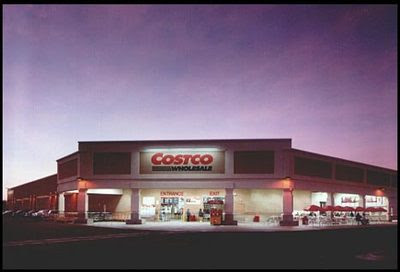 I offered to go with her to help out, but only if we could
ride bikes. She didn’t think I could
carry all that stuff, but she reluctantly agreed.

When we had everything on our list I looked into our cart
and saw that there was room to spare. So
I picked up a few things for us:

Mags stopped me before I got to the furniture department…

With only four bungee cords and a little strategic packing,
I got it all on our grocery getter. Sure, it was a bit wobbly, but it cost us nothing in gas. 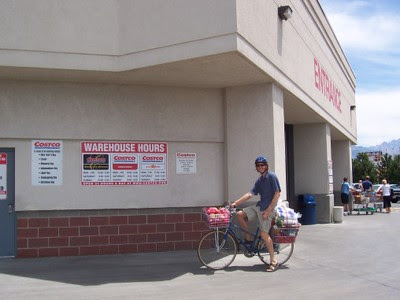 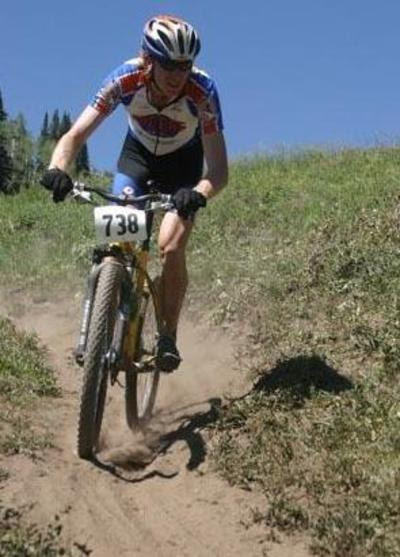 Between the heat, the elevation, the 1000 feet of vertical per lap, a lack of training and even less motivation, I had a difficult race at Solitude on Saturday.  The first climb was up a paved, then dirt, road that is meant to allow us to sort ourselves out before jumping into the singletrack.  Well, it worked.  I was dropped before we got to the top.  Only my teammate Aaron was behind me, and he passed me on the second lap.  I rode the rest of the way alone, except for all the sport riders we kept passing, and had plenty to time to think about how fly fishing and backpacking are not appropriate substitutes for training for races at this level.  I wonder if bowling would have helped.  I did run over a Frisbee golf disc that was sitting on the trail, and I almost hit a disc golfer that wasnâ€™t paying attention.

Twelve of us started, I finished tenth, but at least I finished.  Two didnâ€™t.

After the race Mags and I drove south to Rad Canyon, host of the American Bicycle Associationâ€™s Great Salt Lake National BMX races.   BMX racing is a totally different world compared to mountain and road biking.  Unlike mountain and road cyclists, who are generally skinny with shaved Popeye legs, these BMX cyclists have visible muscles in their upper bodies and donâ€™t own razors.  Instead of two- to three-hour sufferfests, BMX races are 30-second sprints where the key is to be the first one into the first turn, then hold your speed through the bumps and jumps to the end.  We saw a lot of crashes.  BMXers all like to cruise around the parking lot without their shirt to show off their tattoos and sundry piercings to the groupies after a race.  Of course the groupies are actually their competitorsâ€™ little sisters, because BMX is having the same problems mountain biking is having in attracting interest from the general public.  Iâ€™m sure Mags and I were the only spectators that didnâ€™t have a friend or relative in the races.  Itâ€™s too bad because there arenâ€™t many kinds of bike races that you can watch from start to finish.

Maybe BMX will get a little more attention soon.  Itâ€™s making its debut as an Olympic sport next year in Beijing, and the course at Rad Canyon is a replica of the Olympic course. They have weekly races, go check it out.