I like to thumb through old newspapers—doesn’t everybody? –and
recently came across this ad in the June 29, 1900 edition of the Salt Lake
Herald.

I marveled at the thought that Salt Lake City once was the
nexus of bicycle racing in America, and at how the Salt Palace, now just a
dingy old convention center, was home to the best velodrome in the
country.   For only 10 cents I could see a
five mile professional race, the terrific Australian Pursuit and other grand amateur events.  Then to top off an
already perfect evening, they’ll throw in two Vaudeville performances after the
racing.   That’s what I call a dependable
show.

Then I noticed the ad immediately below the Salt Palace ad and
can’t help but wonder if the Terrible Swede and the Red Devil weren’t the
target market. 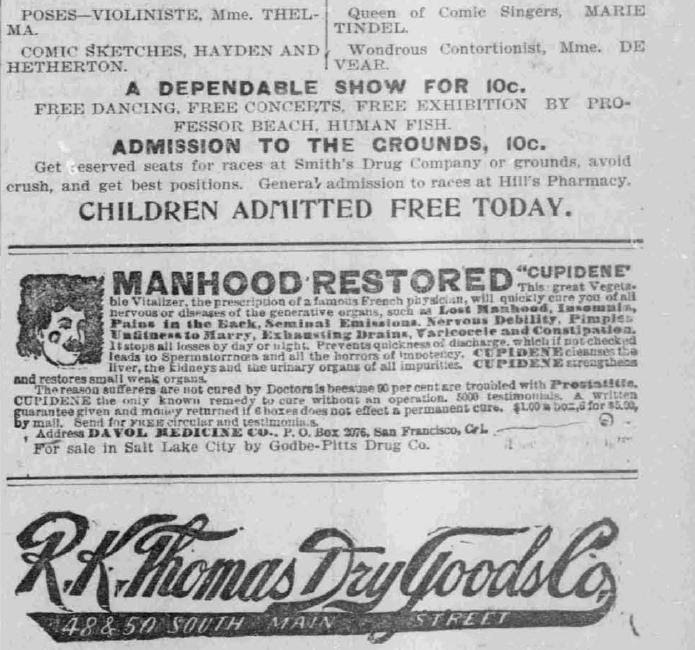 MANHOOD RESTORED  "CUPIDENE"
This great Vegetable Vitalizer, the prescription of a famous French
physician, will quickly cure you of all Pains in the Back, Seminal Emissions,
Nervous Debility, Pimples, Unfitness to Marry, Exhausting Drains, Varicocele
and Constipation.  It stops all losses by
day or night.  Prevents quickness of
discharge, which if not checked leads to Spermatorrhoea and all the horrors of
impotency.  CUPIDENE cleanses the liver,
the kidneys and the urinary organs of all impurities.  CUPIDENE strengthens and restores small weak
organs.

I had to look up spermatorrhoea and varicocele.  They sound worse than "all the horrors of impotency".

But even more horrifying is the juxtaposition of these two ads.  Is it just an unfortunate coincidence
or is the myth that cycling causes impotence over a century old?   If it’s the latter, why is there always a
French Doctor involved when cyclists turn to drugs to enhance their performance?  Either way, after a race
season like the one I just finished my manhood needs restoring.  I wanna try some of that CUPIDENE!