I’m a bit hesitant to write about this incident, because
every time I write about a close call I have on the road my mother gives me a
talking to. She worries about my safety
out there. But this story is just too bizarre
to pass up.

It happened on my commute last week. It was a beautiful summer morning in Salt Lake City. I had a slight wind at my back and was
cruising along at an effortless 24 mph. About two miles into my commute a guy on a riding lawn mower turned into
my lane about 200 yards in front of me. I
know what you’re thinking. It’s a little
odd to see a riding lawn mower on a city street, but there are two things to
keep in mind; it was about 6:45 in the morning, and Salt Lake City is still in
Utah, where we’re not about to give up our rural roots without a fight. 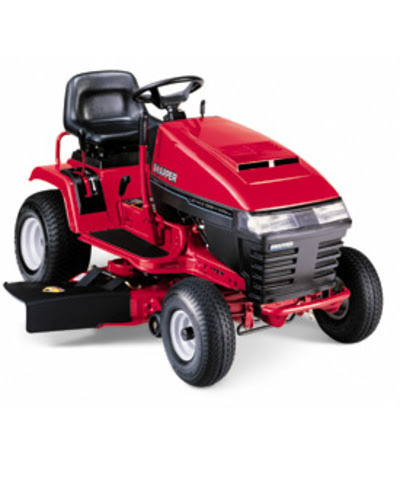 Apparently the max cruising speed of a riding lawnmower is
less than 20 mpg, if I had to guess, I’d say he was going about 18 mph. Remember I was doing about 24 with a tailwind,
so I caught up quickly and needed to pass. There wasn’t a bike lane so I executed
a textbook pass: I checked my blind spot,
signaled my intentions and moved into the left lane. I accelerated smoothly and passed the riding
lawnmower with ease, then checked my blind spot again, signaled right and moved
into his lane in front of him. My drivers’
ed. teacher would have been very proud—had I been in a car and not on my bike.

This is where the fun began. We came to a stoplight so I stopped at the line and he stopped right
behind me. When the light turned green I
learned something new about riding lawnmowers—they can accelerate to 18 mph
much quicker than a cyclist can. I heard
the mower accelerate and then slow down abruptly because I was in his way. He would try to come around me on the left
but I would finally get back to cruising speed and pull away from him—until we
came to the next stoplight. I wasn’t
trying to race him; I just was faster than he was.

This same thing happed at the next four stoplights. At one point the guy actually moved into the
left lane to pass me, but I caught up
to him before the next light, and that was the last straw. When the light turned green this time and he
had to slow down after accelerating too quickly again he started screaming
invectives at me. He told me to get the
%*&! out of the way, and other choice insults.

Being the squeaky clean Utah native that I am, I politely informed him
that I had every right to the lane that he had. I might also have mentioned that I probably had more right to the lane
than he had because, well, he was on a
lawnmower!

Now I’m not making this next part up. This guy got so mad that he tried to run me over—with
his lawnmower. He steered right into
me tried to run me off the road. But
this time I accelerated fast enough to get out of his reach. (Thank you adrenaline) Then he made a crucial mistake. He turned into a Salt Lake City public works facility. The fool is a city employee! What kind of idiot tries to use city-owned
equipment as a weapon and then immediately reveals his place of
employment?

Trust me; a few phone calls have been made.


How sore would I be after bowling not one or two, but seven
games the first time I test out my new ball?

Answer
My right arm feels like it’s been run over by a mid-size
sedan and my glutes feel like I was kicked repeatedly by a mule.

This cross-training business is tough.

I realize I’m perpetuating several stereotypes by writing this, but the conversation I overhead two nights ago at my local Walgreens was priceless.  I was waiting at the checkout line behind two short, drunk Native Americans buying Listerine when one of them noticed that I’m 6’5”…

No ribbons this week 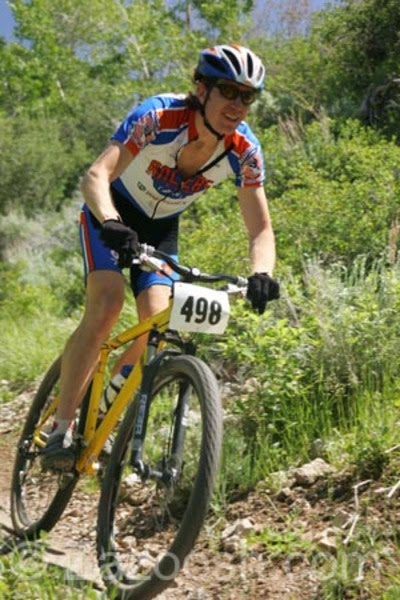 I put in some big hours on Saturday.  It started with the Intermountain Cup race at Deer Valley.  I picked a good week to move up to pro because a lot of guys are in town for the NORBA race on the same course next weekend.  There were 30 pros when we lined up at the start of the race, which is a record for the Intermountain Cup Series.    At the line I joked to Brad that I could be the first ICUP pro ever to finish in 30th place.  He told me his goal was to not finish in a position that hadn’t been done before.

At the start I watched the real pros (for whom racing is more than a hobby) pull away from the field.   I was a reluctant to push myself, partly because I had bent my derailleur hanger the night before while preriding the course, I fixed it by borrowing the hanger from one of my commuter bikes, and partly because I didn’t want to try to hang with the pros only to blow up on my second lap, but mostly because they’re a whole lot faster than me.

I rode a conservative race.  I didn’t get passed after the first lap, and passed a guy on the fourth lap up the Little Stick climb.  I finished 22nd and was happy.

Some things I thought about during the race:


After the race Aaron suggested we ride home.  In my post-race stupor I thought it sounded like a good idea.  We rolled out of the parking lot just as they started handing out awards.  One of the perks of moving up to pro is that I would no longer have to hang around after a race to collect a silly ribbon.   We started climbing up Royal Street, picked up a lightly-used single track and continued climbing up to the Mid Mountain Trail.

I could feel the quart of chocolate milk I had drank for a recovery drink turning to chocolate cottage cheese as I climbed.  But eventually things settled down and I settled into a slow but steady pace.

Fifteen or twenty miles later we came to the ridge connector trail, which led us up through a bit of mud and snow to the crest of the Wasatch Mountains and the top of Millcreek Canyon.  I left my conservationist land ethic at the top when we chose to blast down on the muddiest and snowiest trails we had ridden since cyclocross season.

Six hours, 45 miles and two flat tires after we’d left Deer Valley, I rolled up my driveway wet, tired, starved and covered in mud.   I’d take that over a ribbon any day. 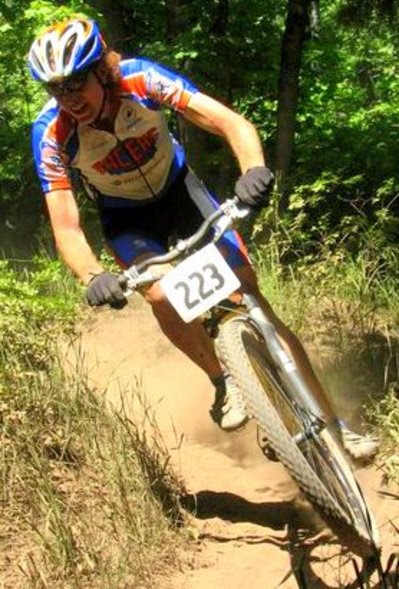 Last week I said winning because your competition isn’t there isn’t much fun.  This week I discovered that explaining why I didn’t win isn’t much fun either.  Here we go again… 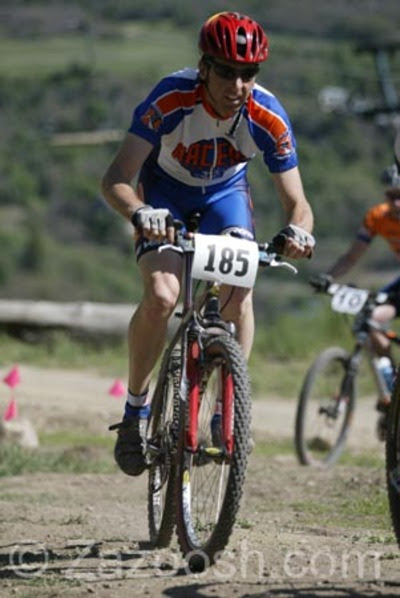 Jarom is a roadie and fellow Racer’s Cycle Service racer.  A few years ago he used to race, and occasionally win, with the pros in the Intermountain Cup.  Nowadays he shows up to two or three races a year and rips our legs off on the climbs.  He still rides a mid-nineties model orange Fishlips bike with a very squeaky bottom bracket and a fork so old that it’s effectively rigid.  Last year at the race in Jackson Hole I watched him crash four times.  I think that may be the only time I've finished in front of him.

On Saturday I sat back and watched him pull away from us on the pavement at the start of the race.  I started my chase halfway through the first lap, and managed to keep him in sight, but I couldn’t seem to close the gap.  Until, that is, on the final climb up the pavement back to the finish line when I came out of the singletrack and saw a guy in a Racer’s kit about 10 seconds ahead of me.  He was struggling up the last hill.

I put my head down and stood up.  My plan was to sit on his wheel until 30 feet before the finish when I would surprise him with a final burst to the line.  He would never know what hit him—a bit like my finish this year at Five Mile Pass.

It took quite an effort but I did catch him.  That’s when I noticed that this guy was riding a red Gary Fisher.  The following thought interrupted my mental fantasizing of standing atop the podium again:  “Did Jarom trade his orange Fishlips for a red Fisher in the middle of the race?”  Rational thought is one of the first things to go during a race with this much climbing, right after temper control. 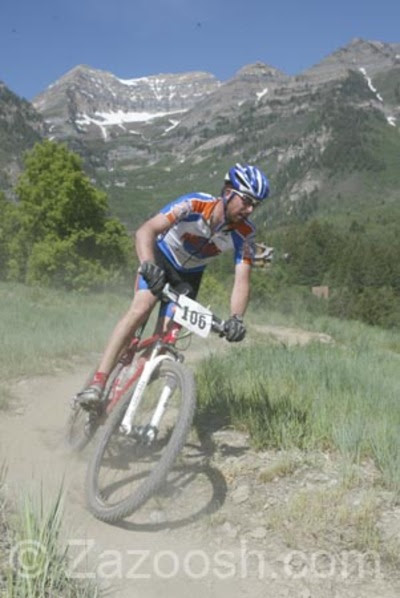 When rational thought returned I realized I had given an all out effort to catch Jarom’s younger brother Joel, a sport rider and all-around nice guy but certainly not someone I needed to beat.  I nodded as I went by, trying to conceal my disappointment, and strolled to the finish line 55 seconds behind Jarom.

So once again I was second in the Expert class.  That's the third time this year.  I’d rather be able to say something like what Rich said about his performance in the Draper race last week:

It is great to have a finish where I can say, 5th without asterisks, parenthesis, or caveats.