A file cabinet and a 2x4

I missed the skate race on Saturday.  I was disappointed, but accept that it was a blessing because I’m sure I would have been more disappointed when
my finishing time in the 20 kilometer race didn’t fall exactly on the curve I
made in my last post.  Missing a race is
bad enough but having one’s scientific foundation shaken is outright
catastrophic.

My reason for missing the race is twofold.  First, the innards of my car are still strewn
about my friend’s garage as he spends his evenings methodically replacing
my blown head gaskets.
A friend like that is worth waiting around for.  Second, the ride to the race I’d bummed fell
through when Reed called me early Saturday morning to say he was too sick to
race.

Dejected as I was, I determined not to let this day slip
away without at least putting some sort of feather in my cap.  Instead of racing in a ski race in which I was
assured a good esel spark-ing, I
decided to add to my ever-lengthening list of absurd and sundry items I’ve
hauled on a bicycle, something I actually do spark
esel at.  Today’s additions are a
file cabinet and a 2x4.   What’s on your list? 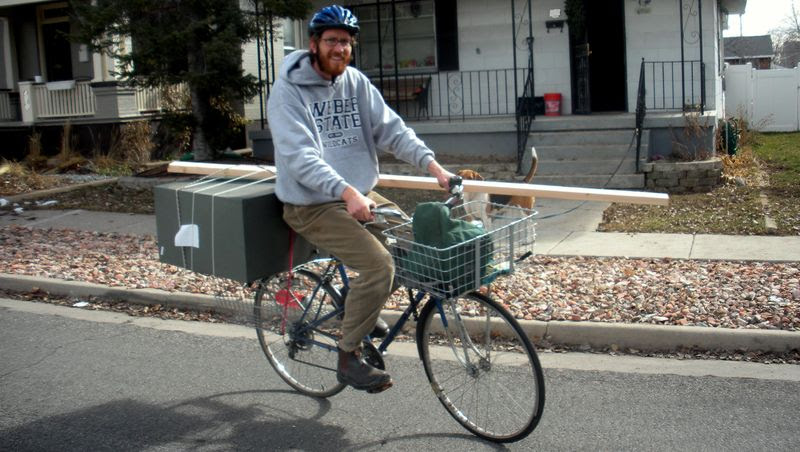 SoHo 10k and a race prediction 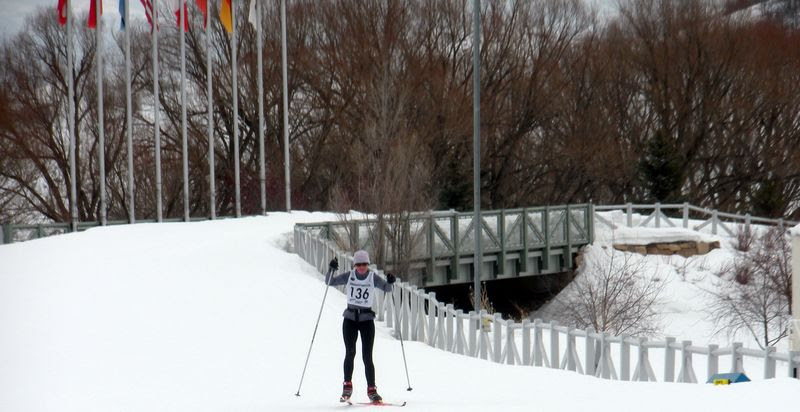 Mags and I did another ski race last weekend.  This one was a 10 kilometer race that was
part of the Wasatch Citizens Series, which is to cross country skiing in what
the Intermountain Cup is to mountain biking in Utah.   In
other words, most people are just out having fun, but there are a few folks that
take it far too seriously.

Here’s a case in point.
Like the ICUP, there are categories for racing based upon skill level in
the WCS.  Fast people should race in the
open category, and beginners should race in the novice category, the rest of us
race in what I call the age-grouper categories, where we race against people
close to our same age.  I don’t know which age group started behind mine, but
mid-way through my first lap some of them started to catch up to me.  On one particularly steep uphill I was trying
to go around some slower skiers—effectively taking up the entire track—when a
guy from behind me started to get impatient.
“Come on,” he said “we started a
minute behind you.  Give us a break.”

“I’m trying to pass these folks too.” I replied, but was
thinking more along the lines of “If you’re so [expletive deleted] fast why
aren’t you racing in the open category?”

Also like the ICUP, there were lots of people standing
around before and after the race talking about their equipment.  I’ve never been very good about talking ‘gear’
and actually can’t think of a more vapid topic of conversation, but I felt even
more out of place at the ski race.  People
were talking about ski flex, special grinds, binding types, carbon fiber this
and carbon fiber that, and how many fluorocarbons were in their wax.  Pshaw, high-flouro wax? Who do you think you
are?  Should I call you Sven? Or Thor?  It’s not the arrow, it’s the Indian.

Or maybe it is the arrow.
I got passed several times on
descents by the same guy I’d just passed on the climb.  I’d like to blame that on my transcendent
inability to go fast downhill in any sport, but there was clearly something more
going on.

But oh well, there’s only one more ski race for me this
season and I’ll be using my same old hydrocarbon (aka zero-flouro) wax again,
and I’m OK with that.  But I do think a
prediction is in order.  My first race
was 5 kilometers, the next one was twice that distance, and the race on Saturday
is twice that again.  Not surprisingly,
my time in the second race was not exactly twice that of the first race, but
interestingly, it was less than twice my 5k time.  Clearly, this means that the longer the race
is, the faster I’ll be.   Sure, some might argue that the race
conditions were different, but I choose to ignore the fact that there was a
blizzard at Snowbasin while the race at Soldier Hollow was under sunny skies on
immaculately groomed trails.  [This also
explains why my second lap at SoHo was 14 seconds faster than my first.]  So  I’ve decided to use the data from my
races, consisting of exactly two data points, to predict my finishing time in Saturday’s
20 kilometer race.  As I've done in the past, I made a chart to
help me: 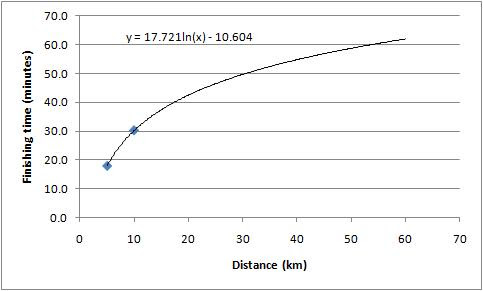 As you can see from the chart, I’ll be finishing in about 42 minutes.  Sochi, here I come. 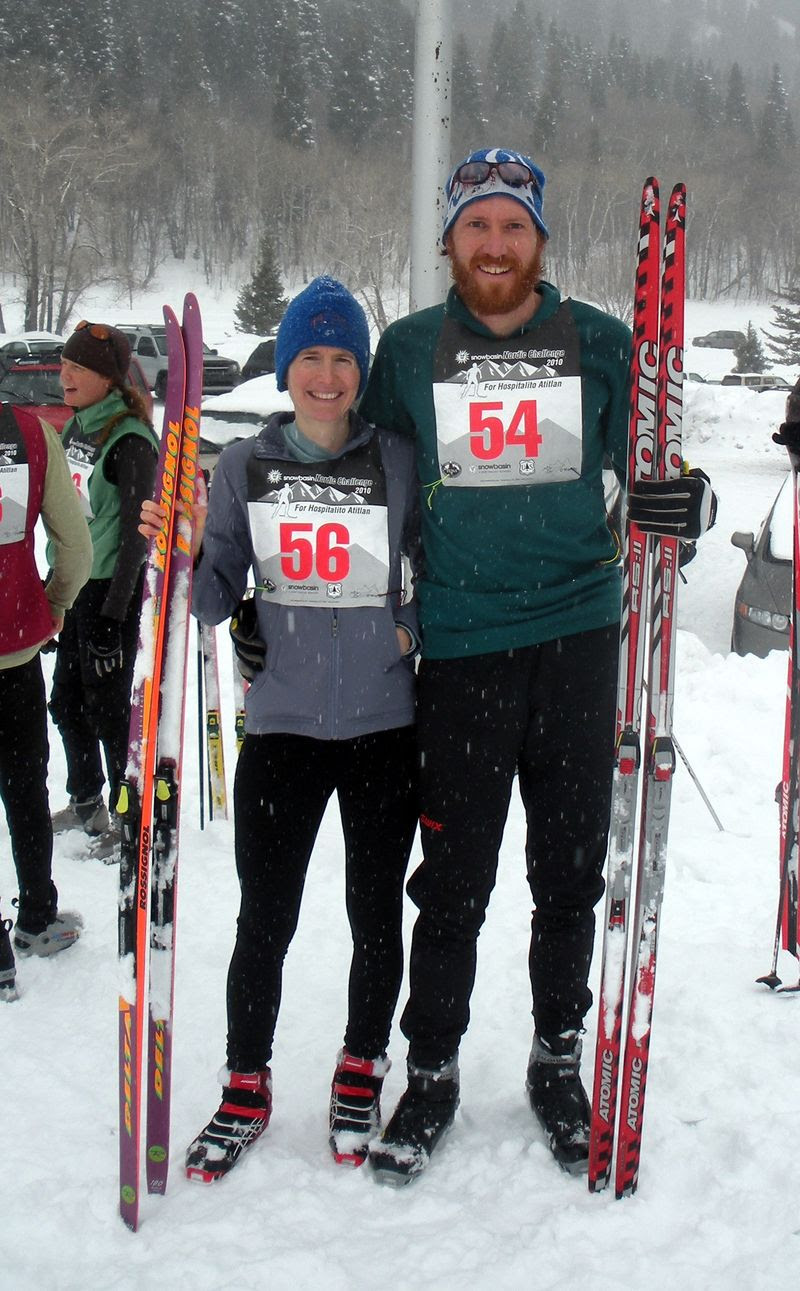 For three years now, I’ve been threatening to try cross country ski racing.  I made good on that threat Monday morning.  The Snowbasin Nordic Challenge is a 5 or 15 kilometer skate ski race held to raise funds for a hospital in Guatemala that was nearly destroyed by a mudslide in 2005.  Sure it was nice to contribute to a worthy cause, but I was more excited that there was finally a cross country ski race held on a weekend where I would be in town.

Getting to Snowbasin was not without incident.  Our car started overheating when we pointed it toward the mountains.  That, combined with the sputtering and misfiring we were experiencing earlier in the week, leads me to suspect the worst—head gasket failure.  We stopped three times to let the engine cool off so we had only 15 minutes to get ready when we got to Snowbasin.

That was just enough time for Mags and me to get our bibs, click into our skis, Mags to lose her gloves, and me to figure out where our timing chips were supposed to go.  Then just like that the gun went off and the race was on.  Mass starts in ski races can be a little dangerous with all those sharp poles flying everywhere, but we both managed to get through it with both eyeballs intact and no new orifices.

After a short downhill, the race turned uphill and I started moving up.  I started to get that sandbagger feeling after I passed a dozen or so racers.  I was wishing I’d signed up for the 15k race.  Then the trail got even steeper and I changed my mind again.  It had been a while since I’d felt that old familiar tinge of exercise-induced nausea, but there it was, in all its glory, starting from deep in my gut and getting stronger with every stride.  I looked to the side of the trail for a place to puke, but the top came before the barf did.  Phew! Chuckage contained.

Mags had her own bout with nausea and she too was able to contain it.  She finished the 5k third among women and first in her age category.  I was second overall with a time of 17:55 and about 30 seconds behind the winner.  It was a well organized race, with lots of raffle prizes, great food and a good turnout.  Uh oh, cross country ski racing seems like something I could get into, but another expensive hobby is the last thing I need.