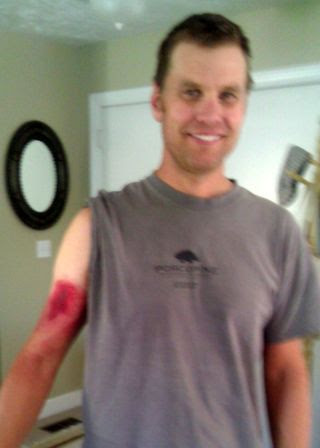 My buddy Ryan is a lucky man.   He got hit by a car this summer.  Not once, but twice.   That makes it three times he’s been hit in
his bicycle commuting “career”—four if you count the time he almost killed an
overly friendly bull mastiff.  The first two
incidents involving cars were hit-and-runs, so he didn’t get to cash in.   The third time he got hit, last month, the
driver actually stopped to make sure Ryan wasn’t dead, but he was uninsured so
Ryan once again didn’t hit the jackpot.

I suppose that doesn’t sound very lucky, really, but I will
say it again:  Ryan is a lucky man, and
not in the sense that “if it wasn’t for bad luck he’d have no luck at all”
either.   Every time Ryan got hit he was able
to walk away relatively unscathed.
Although he looks pretty scathed in the picture above if you ask
me.   The thing that makes him so lucky is that his
wife still lets him commute on his bicycle. 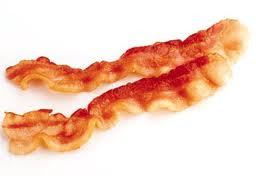 See, Ryan is a father, breadwinner (that’s an old fashioned
way of saying he brings home the bacon) and NPR donor.  There are people who depend on him, public
radio freeloaders like myself included, and he can’t really win bread if he’s
laid up in traction after a careless driver fails to see him—and fails to hear
him crash into her car two thirds of the time.

On a recent ride Ryan and I were talking about ways to avoid
the kind of luck he’s been having.  In
general, we decided are two approaches to lowering the probability of getting
hit:  1) Make yourself easy to see, and
2) reduce your exposure to traffic.

I know Ryan is pretty good about making himself easy to
see.  He’s uses lots of flashing lights
and wears a dork jacket (Dork Jacket pictured here), and he says he’s planning to look like a rolling
Christmas tree when he commutes this winter.
Reducing your exposure to traffic can be a little more difficult.   Part of that is living close enough to your
place of employment that you’re not out on the roads as long every day.    Another part is choosing a commuting route
that avoids the arterial roads and winds through residential streets instead.   Not only is this safer but the people
watching in some of these neighborhoods is much better.

Ryan thought of another way of reducing exposure that I have
been doing, somewhat subconsciously, for some time.  He said he is going to avoid commuting at
rush hour.   It’s so simple that most
people never think about it, but I’ve noticed it myself.  If I arrive at my office at 8:00 in the
morning the traffic is much thicker and the drivers are far dumber than if I arrive
at 7:45 or 8:15.   I like the idea so
much that last week I told my boss I was going to shift my work schedule to
where I would start my day 20 minutes after the hour and end it 10 minutes after
the hour—not the same hour dummy, I’ve got to put in a full day like everybody
else—and the difference is very real.
Less traffic and more courteous drivers.

So what other ways do you use to avoid getting lucky like
Ryan when you’re bicycle commuting?  I
read recently that cyclists should be just a little erratic when riding in traffic.  Throw in a little swerve here and there,
etc.  to keep drivers on their toes and
make them aware we’re out there.   I don’t
know how I feel about that technique, since I think rider unpredictability is
one of the leading causes of motorist/cyclist disharmony, but if it makes
cyclists safer it might not be a bad idea.
But what else have I missed?  How
can we make Ryan’s wife more comfortable with his bicycle commuting?