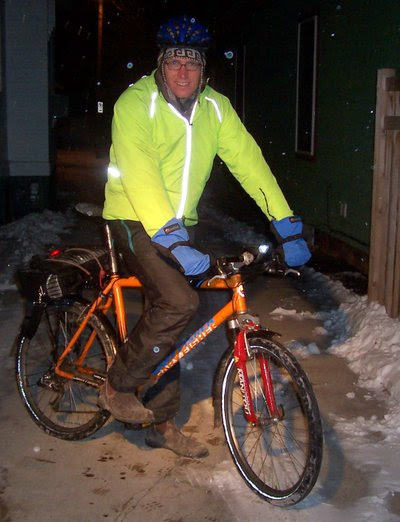 I helped out a motorist this week.  It was on my evening commute after a snowy afternoon.  It wasn’t very cold, but I was bundled up nonetheless because if I don’t wear my extra layers home in the evening they won’t be available for me when I need them the next morning.  I’ve been wearing extra layers over my entire body—except my face; for some reason I never wear anything over my face—to deal with the single digit temperatures we’ve been having lately.  Over all of those layers I had on my über-bright hi-vis cycling jacket.  I quit thinking über-bright cycling jackets were dorky a long time ago, but I think some people still do, and based upon how I looked on this particular evening I’m sure they would have thought I was an über-dork.

Anyway, I was waiting at one of the 18 stoplights I curse every single morning and evening when I smelled the acrid stink of burning rubber.  There was a guy in a pickup truck on the other side of the road that was stuck in the snow-packed gutter.

I judged him.  He was a younger guy with a goatee (the mullet of the new millennium). He was dressed like a manual laborer.  He probably likes NASCAR and I found out later that he has the grammar to prove it.

I deigned to watch him spin his tires a few more times to let my perception sink in before I mercifully decided to go over and give him a push.

It took me less than a minute to push him out.  He didn’t seem to be aware of the rock-back-and-forth technique to free a snowbound vehicle but he caught on quickly.  When he got out he thanked me and I said it was nothing.  I suggested that he get some sandbags or bags of kitty litter in the back of his truck during the winter so this kind of thing wouldn’t happen again.  He said he would.  Then he said something that completely reversed the roles I had projected onto him and me.

He asked me if I wanted any money for my time.

Is this how the general public perceives cyclists, as either elitist snobs like I was acting that night, or as dorky ne’re-do-wells that can’t seem to catch a break, like I was looking that night?

The perception that cyclists occupy only the bottom rung of the economic ladder is more common than you’d think, in spite of my one-man crusade to convince people otherwise.

Just last night I was reading an article in the alumni magazine from my undergraduate university.  It was about reducing materialism and it offered some questions to determine if we are materialistic.  The last question read:

Do you look at the person in the luxury automobile and assume that he is more successful and more intelligent than the individual riding a bicycle?

OK I get the point.  While I’m out there justifying my suffering through winter bicycle commutes by thinking elitist thoughts and misjudging people by their appearance, rednecks and materialists alike are looking at me from behind their steering wheels and misjudging me.

Whaddaya think? Did I do the right thing or did I let this guy off too easy? 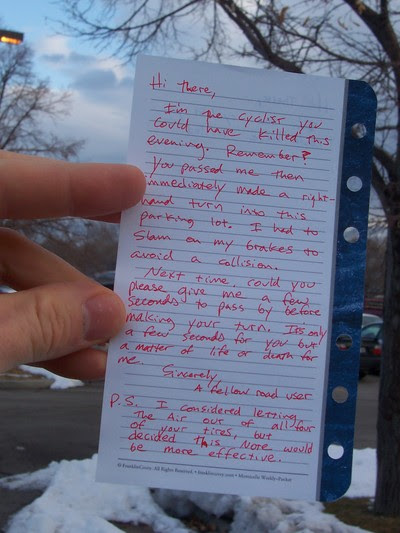 You’ve heard me rave about the wonderful things a bicycle
with baskets can do for you, but did you know riding your Grocery Getter can get you a
date? I’ll let Mags tell the story…

So, you don’t think a bicycle is an implement of seduction?
Say, as sexy and provocative as a mustard-colored, fully restored and souped up
50s era Cadillac El Dorado convertible? Well, think again. The scene: 3rd
East and 7th South, Salt Lake City. The bike: an aquamarine Gitane
of indeterminate age with three enormous wire baskets and white sidewall tires.
The come-on: (a direct quote), “You look good on that bike.” (From guy in a car
at the intersection.)

He crosses the
intersection then slows until I catch up and he continues the conversation
through the window at me. He’s driving a Ford Sebring and I’m on my bike—we’re
both moving—a conveyor belt conversation.

“Why aren’t you riding one of them now?”

“They’re at home. But, I do have two bikes- one’s a Schwinn
and the other’s a (fill in a bike name here; I can’t remember what he said).
I’ve got an antique store and I sell some there and some on E-bay. Where are
you from? You look like you’re from Europe.”

“Oh.” He looks at me. “I’m going to stop.” Apparently, he’s
had enough of conveyor belt talk and he pulls over in front of the Tongan
church on about 450 East.

He jumps out of the car; but leaves it running and I stop.
Hell, why not, this could be interesting. He’s got a faux suede jacket and a
thick multi-colored scarf tied in the front. He’s probably just about my
height, maybe an inch taller, and I outweigh him. Yeah, I’m not worried.

“Where do you think I’m from?”

He’s got black hair, poking out beneath his hat, olive skin,
some facial hair. “The Middle East.” I say.

“Nothing’s coming to me. Yeah, I can’t think of the
country.”

“Tunisia.
It’s Africa, I’m from Africa.
But, I’m not black.  Africa is a continent not a country.
Many people here think it’s a country.”

“You know in Star Wars, the planet Tatooinne? That was
filmed in my country.”

Umm, how to respond?

He continues. “When can we go riding together?”

Anyways, you get the drift of the conversation. He tries to
get me to take off my sunglasses to see the color of my eyes. I tell him that
they’re brown but don’t remove the sunglasses and casually mention that I’m
married.

“What? And I waste 30 minutes talking to you?” He pauses. “A
happy marriage?”

“Do you have any sisters?”

“Maybe some friends who ride bicycles?”

He gives me his cell phone number to pass along to my
single, bike-riding female friends. He shakes his head as he gets in the car
and drives off. As I’m riding home I realize that he never even asked my name
yet he was willing and ready to go riding into the sunset (on bikes of course)
in a split second. Ah, such is the power of shiny chrome and a shifting
derailleur. Or, maybe he was just desperate.

Either way, I’ve still got Saber’s number if you’re interested.