With that in mind, I present to you the winner in this year’s office costume competition… I decided to ride the chopper today, not because it goes with the costume but because, well, somehow it actually does go with the costume.  Here’s one of me getting some sweet wheelie action. 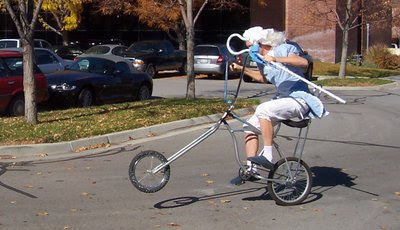 I met Leif at Red Butte for some late season singletrack
riding Friday morning. Leif has a unique
talent when it comes to cycling.  No matter how hard we’re riding, he can always
carry on a conversation. We could be
bombing down an unusually tight section through the trees, or grinding our
way up a loose gravelly climb, he’ll be
sitting right on my back wheel talking to me about anything that comes to his mind. It doesn’t slow him down either. How he rides like he does and retains his
ability to construct complex and grammatically correct sentences
when his heart rate is above the red line is a marvel to me. But that’s Leif, maybe all the lutefisk he
ate in his Swedish upbringing (in Wyoming!) has something to do with it.

Today he told me about his reticence for taking the GRE, his
early days of racing “way back in the mid-nineties”, and about the time he had
to be hauled off the race course in an ambulance and was chewed out by the emergency room doctor for having pure electrolyte drink running through
his veins. At one point he asked me a
question on a steep, leaf-covered uphill switchback. I tried to answer coherently while
maintaining my pace and getting around the switchback, but I failed. My back wheel slipped and I put my foot down,
something Leif never does because it would interrupt the conversation.

Leif, sitting on my back wheel as usual, had no choice but
to run into me. He didn’t hit me hard,
but it was enough to throw off his balance. I looked back in time to see him fall to the downhill side of
the switchback. There was a wooden
retaining wall below him and he was dangling over the edge. His arms were about six inches above the
ground at the bottom of the wall while his legs and his bike were on the trail at
the top of the wall.  Oh, how I wish I’d brought my camera!

With no camera to take his picture, I did the next best
thing—I helped him up. I grabbed a leg
and an arm and pulled. He was unharmed
and his bike didn’t get a scratch. It
was almost the funniest thing I’ve seen on a bike in a long time. But what was funnier was that Leif kept the
conversation going through the whole incident.

My rides lately haven’t been filled with much stuff to think
about, so I’ll give you some updates instead.

Two days after I posted about the shoes hanging from the
power lines I was surprised to see that most of them have been removed. There are still a few pairs hanging here and
there, but the majority of the shoes are gone. I like to believe that someone at the power company read about the shoe
epidemic here and decided to do something about it.  But I still want to know what it all means.


The Wednesday night bowling league has started up again,
which means my weekly Wednesday night rides haven’t been happening. But I’m sure bowling is going to make me
faster next season, right? If nothing
else, bowling will maintain my competitive edge. For instance, my quest for a 200 game is
finally over. Last night I bowled a 222,
my personal best, and just three pins shy of qualifying for a commemorative
lapel pin courtesy of the USBC (that’s the United States Bowling
Congress for you non-bowlers). Check it out--only one open frame: At first it was just a single pair.  Then a second pair showed up.  Then a third.  Last week I counted twelve pairs on my bike ride home.  Somebody is trying to tell us something. They are spreading too.  I’m starting to see them at other intersections.  There’s even one pair above a particularly busy intersection I pass through every day.  Have you ever tied the laces of a pair of shoes together and thrown them into the air?  It takes a bit of luck and a lot of athleticism to hook them over a power line.  Considering the number of shoes I’ve seen lately I’m pretty sure we’re not dealing with amateurs.  These people are serious. 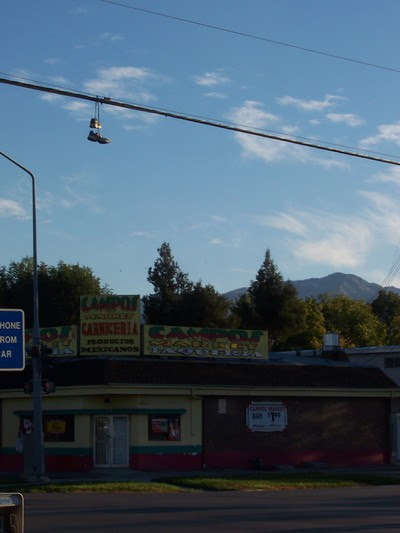 At first I thought somebody was trying to start an urban version of the classic western shoe tree.  I’ve been interested in shoe trees ever since Mags and I stumbled upon one on our honeymoon in Oregon.  I tell you, just looking isn’t enough.  You’ve got to throw a pair of shoes into the tree yourself to fully appreciate the singularity of this populist form of art.

Since then we’ve found several other shoe trees in our travels across the west.  One Cottonwood in Nevada has at least 1,000 pairs of shoes adorning its branches.   A Doug-Fir in Washington has shoes hanging 80 feet above the ground.  I hear there’s a shoe tree in Park City, but I haven’t seen it.  I will stumble upon it sooner or later.

Shoe trees are a little understood, always under-appreciated expression of the American Spirit.  They occupy a lonesome niche in modern Americana.  They have been the purpose behind many otherwise purposeless road trips. Shoe trees come in all sizes and species.  Some are sparsely populated with shoes and others are so heavily laden that branches break with each rain storm.  But they are always miles from nowhere on a back road traveled more by cows than cars.

I’ve never seen an urban shoe tree.  And shoe trees don’t spread across neighborhoods like the shoes in Poplar Grove are.  So I don’t think that’s what’s happening here.

Another theory is that shoes hanging from power lines is a sign of gang activity in the area.  But that theory has been scientifically debunked.  Besides, if you were a gang member, would you hang up a sign notifying police where you operate?

So what is going on here?  Is it a bunch of bored teenagers looking for something to do?  Meddling hipsters trying to drum up material for a cover story in City Weekly?  Fifth grade bullies reigning in terror?  Have you got a better theory?

I don’t know what is happening here but somebody’s got to find out. 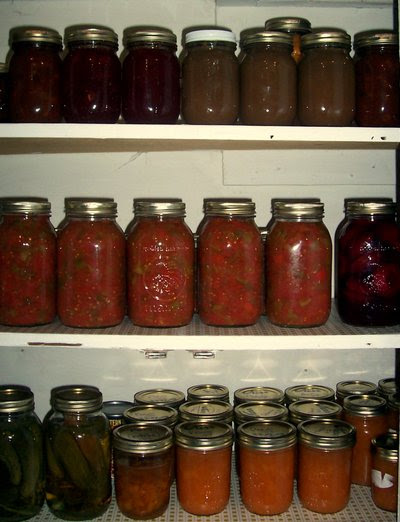 I spent Friday afternoon helping my mother clean out the basement of her old house.  It is the house she grew up in, and has housed five generations of my family.  One of the tasks Mom had for me was cleaning out a cupboard full of canned fruit that her mother, my maternal grandmother, had canned.

The steel lid of the first jar disintegrated at the touch of my finger and I thought this was going to be a messy job.  The fruit inside had morphed into an unidentifiable, desiccated black lump.

While there was no date on that jar, some of them were dated, and most were in much better condition.  The oldest jar I found contained pear halves canned in 1963.  There were a lot of jars of cherries from 1968, which, from the number of jars, must have been a bountiful year.  What amazed me most was the condition of the jars; most of them were still sealed.  The fruit inside looked pretty good, if maybe just a bit darker than it should be.  There was one jar of tomatoes from 1972 that was bright red and looked like it had been canned yesterday.  I was starting to get hungry.

Mom thought I was nuts, but I had to inspect every jar before I threw it out.  See, I never knew my grandmother; she died three years before I was born.  To me she had always been just a character in a story or a woman in a black and white photograph.  Now for the first time I was holding something that was a part of her life.  It was something tangible that I could feel.  Something I could heft and know that her hands had once hefted it too.  She was becoming a real person right there in my hands.

I knew what I had to do.  I had to eat some of Grandma’s home cookin’.

I found a small jar of black cherry jelly from 1971—four years older than me.  The seal was still tight, the jelly looked fresh.  The lid didn’t have any of the corrosion I had seen on the other jars so I set it aside.  I envisioned myself going on a bike ride with my jersey pocket stuffed with a peanut butter and jelly sandwich made with Grandma’s jelly.  I thought I would finally have a snack from Grandma’s kitchen.

Again, my mom thought I was nuts, and when I mentioned the idea to Mags she forbade it.  She says a fresh looking jar could still be contaminated with botulism—or something worse.

So sadly, I have put the idea on hold.  I still want to have a taste of my grandmother’s life, but not if it’s going to kill me.  I’d like to get to know her, but not that soon.  I wonder if any of you know if there is a way I can get it tested.  Until then, I have set the jar aside to wait.  It’s waited 36 years, I’m sure it can wait a little longer.