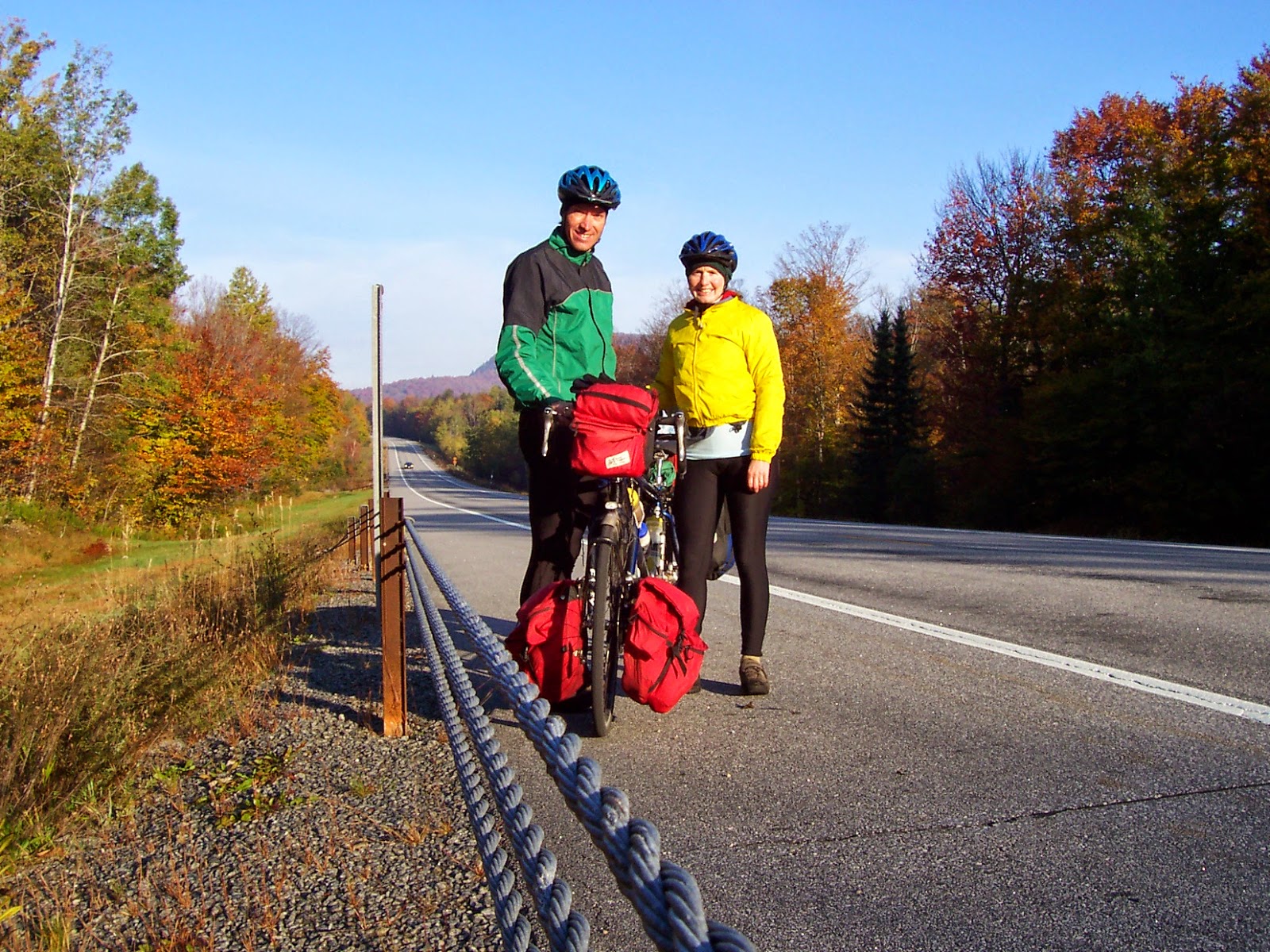 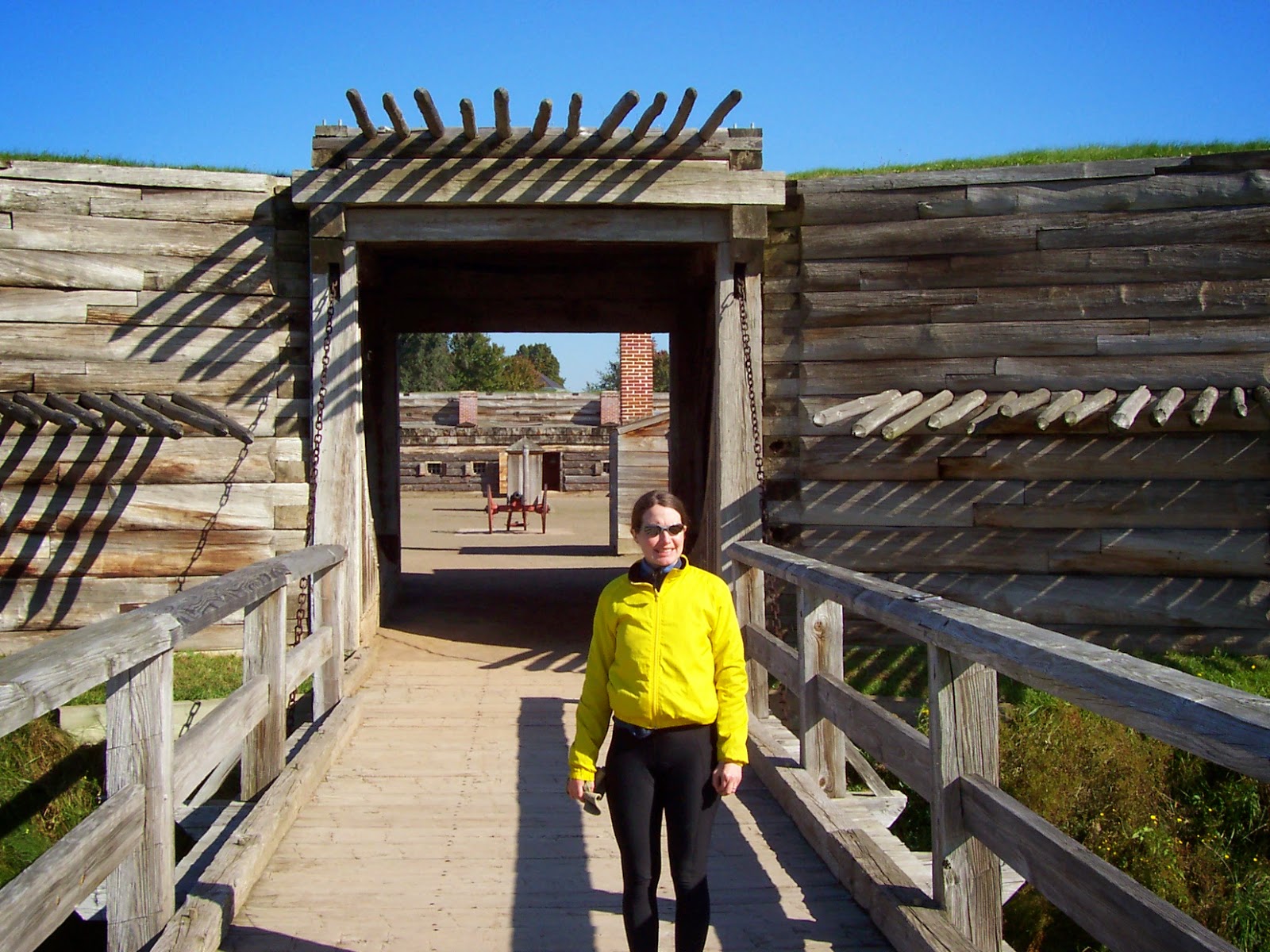 At Rome, New York, we stopped at Fort Stanwix National Monument. It is a British built fort from the 18th century that protected the only portage between the Mohawk River Valley and Wood Creek. It is the only route from the Atlantic Ocean to the Great Lakes Basin that doesn't require crossing the Appalachian Mountains.

The American colonists took Fort Stanwix in the first years of the Revolution and somehow managed to hold it for the duration. The British held it under siege for three weeks but could not penetrate it. General Burgoyne’s British Army was so demoralized by the failed siege that many deserted and he was forced to surrender his army two months later. The Americans won not by overpowering but by persevering.

We also wanted to stop at Fort Ticonderoga but were disappointed to find that it is privately run and has a hefty entrance fee. Instead we hopped on the ferry across Lake Champlain into Vermont. The ferry operator told us we were three hours behind another cross country cyclist. I don’t think we’ll catch him.

Passing through Adirondack Park, I was expecting it to be something like Yellowstone or the Tetons, with abundant camping and lots of things for the public to do. Instead I found that much of the park, at least what you can see from the road, is privately owned and posted: no trespassing. We had to camp behind the pavilion at the city park in Speculator. I still don’t know why they call the Adirondacks a park at all.

We were fortunate to pass through the Adirondacks mid-week. When we crossed the Green Mountains at Brandon Gap in Vermont it was a Saturday morning and the leaves were at the peak of their fall color. By that afternoon the roads were packed with leaf peepers driving slow and not watching the road. The town of Woodstock, VT is one of the few places on this trip I have been to before. That was about a year ago, after the leaves had fallen from the trees. The town was mostly deserted and I easily found a parking place in the green. This time there was a mile of cars backed up bumper to bumper on both ends of town. Some of you know that my favorite part of riding a bike is zipping past cars stuck in traffic. I just want to laugh at all the people sitting there realizing they should have ridden their bikes too.

The streets of Woodstock were packed with people. Most were dressed in the latest fall fashions and driving expensive cars with out-of-state license plates. Most surprisingly, people didn’t stop and gawk at our bike like everywhere else in the country. It seemed they were more interested in being noticed themselves then taking notice of us. We bought some fresh apple cider from some kids on the street and were eager to get out of there.

We’re taking a couple of rest days visiting some friends here in West Lebanon before our final push to the ocean. We’ve come over five thousand miles and have just a few hundred more to go.


Posted by Chad at 06:45 AM | Comments (2)
Original Comments: Fall Colors
We've been having some great fall weather too! It's getting exciting that you're almost there and even more so that you'll soon be home.

we've been home for almost a week now, it's good and bad, ivy and mick made up a song about you two not long after we left you, and they STILL sing it!

'chid and migs (ivy accent), on their biiike, with their baags, what a siiiight!' i doubt it will be a chart topper, but i think it's pretty special. let us know when you are back, maybe ivy can sing it down the phone to you.

enjoy the last few hundred miles! i can't believe how far you've ridden - so impressed!
did i tell you my brother got the bronze in the world champs? I know you don't care Chad, but i thought Mags would want to know. downhillers are cool too!